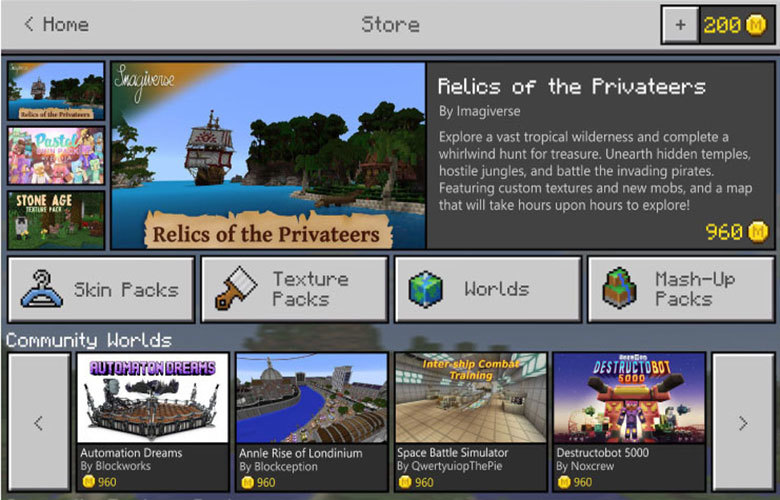 Minecrafters who play the game on the Pocket and Windows editions will soon have the opportunity to further their enjoyment of the game through the launch of a marketplace, due for release with the 1.1 Discovery Update. The idea is that players will buy Minecraft coins through in-app purchases on their devices, and then use the coins to buy, for example, new skins, adventure maps, texture packs, mini-games, and more, with prices ranging from between $1 to $10 per creation.

Initially there will be nine creators at launch, including BlockWorks, which has created “Scorching Sands”, a post-apocalyptic world littered with artefacts from a bygone era, “Skyfair”, with islands of floating amusement parks and funfair games, and “Automation Dreams”, a science-fiction steampunk world ruled by a giant robot.

In many ways the introduction of Marketplace is Mojang’s version of an app store, but exclusively for Minecraft. The revenue split mirrors that of Apple’s app store, with creators taking 70% and the app store platform taking 30%. However, whilst an additional revenue stream for Mojang and parent company, Microsoft, the development is clearly also good for creators, as it offers them the opportunity for an income stream from the huge Minecraft player base, whilst also giving players what will be a growing curated catalogue of maps, packs, and other mods, to expand their worlds.

John Thornton, Executive Producer of Minecraft Realms believes that “bringing other creators in to sell their goods is good for players, as it enables access to a ton of different kinds of content. We know that people want to change the look of Minecraft to be what they want”. He added that “there are also a number of individuals who look at Minecraft as a platform for entrepreneurialism, looking for a way to make a living doing something they love. For players, this is the best way to get content easily in the game, and for creators this ends up being a source of revenue for them, so they can continue to make fantastic creations for all the players.”

Keywords: The Minecraft Marketplace resources Minecraft coins Pocket and Windows editions
Register and opt-in to our Newsletter for semi-regular updates!